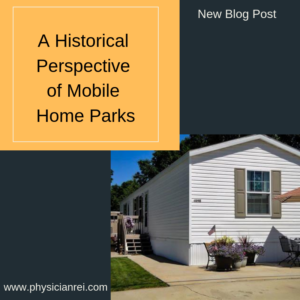 Perhaps ironically in contrast to the “trailer park” negative stereotype that is sometimes associated with mobile home parks, mobile homes themselves actually got their start as a luxury item of the 1920’s. During that time, coincident with the number of households owning automobiles, the pastime of road travel became more and more popular. At that time, the options for overnight stay when on the road was mostly camping. The earliest mobile homes were designed as an alternative to camping for those that wanted to travel. For those on a budget there were DIY kits to build your own but many high-profile and wealthy individuals had elaborate, custom-made mobile homes constructed for their travels. Well appointed “motor courts” sprang up to accommodate these types of mobile homes and cities became interested in attracting these nicer “mobile” clients as a way of getting them to stop and stay at their motor courts and subsequently support their local economy by spending money there.

In the 1930’s, these types of mobile homes also served as a means of migration throughout the country during the Great Depression for those families that had the option of going out in search of work or better opportunities for their family.

Once World War II started the country had an immediate and urgent need for massive amounts of wartime housing in and around facilities built or put into use for supporting the needs of the war. The government bought up tens of thousands of mobile homes and facilitated the set up of multiple mobile home park sites to accommodate these homes in key locations, some of which remain as mobile home parks today.

After the war ended, demand continued as service men and women returned home and needed an option for themselves and their families and the affordability of mobile homes met that need. This spurred the creation of even more parks throughout the country. Over the next couple of decades, parks continued to be built despite challenges with their reputation in some cities or parts of the country. Many attempts were made over time to challenge their existence by trying to manipulate zoning regulations and even vehicle versus building definitions and codes. In some areas this led to parks starting to be developed either in less desirable parts of town or further out on the outskirts of cities.

Nevertheless, the demand for affordable mobile homes continued and the 1960’s saw an uptick in the number of mobile homes made for production as advances in technology and production lines allowed for faster and more affordable production of these accommodations. Mobile homes produced during this time saw an increase in their average size including the development of the double-wide trailer during this period. The early 1970’s saw the peak of production with an astounding one-third of newly built single family homes being a mobile home!

As with exponential growth in many industries, mass production in the face of little to no regulation on mobile home standards led to many incidences of poor quality homes being built and put into use. This led to the need for government to develop standards for home manufacturing which they initiated in 1974. By 1976, all newly produced “manufactured homes” as they were then legally referred to, were required to be certified and receive a HUD certification label which was permanently affixed to the outside of the home, similar to the VIN plate on automobiles.

The number of mobile homes and parks continued to grow for a couple more decades with mobile homes comprising on average about 7.6% of housing in 2000. In the states with the most mobile home parks, up to 15-20% of housing is supplied by mobile homes. Eventually, development of new parks significantly trailed off in many cities both for economic as well as socially biased reasons. For cities, mobile home parks can be an economic drag on their budget as the resident base utilizes more local public services than what they contribute to the tax base. Therefore, some cities have such stringent requirements so as to effectively prevent the creation of new mobile home parks. In fact, nationwide, the number of mobile home parks is actually decreasing by about 1% per year as parks are removed to make way for development of retail or other housing like homes or apartments.

Nevertheless, mobile home parks remain the embodiment of the “American Dream” for many people…..the opportunity to own one’s own home. In many cities across the U.S., the ability to afford a single family residence capable of accommodating a family is still unattainable for many. The ability to accomplish this by ownership of a mobile home is quite a good option in many cases. And that certainly does not equate to substandard living, as many parks and mobile homes across the country offer impeccably clean and modern living options with a multitude of amenities.

The bottom line, mobile homes and mobile home parks have served a significant place in the history of housing in the U.S. and they remain a staple of affordable housing for a large population of people. Hopefully this look back at history gives you the ability to see this asset class as a solid housing option that deserves preserving and protecting as an integral part of meeting the country’s affordable housing needs.