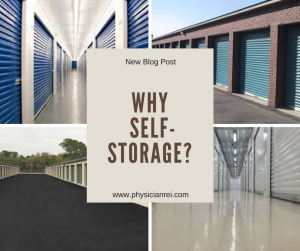 I’ve received several inquiries questioning the benefits of self-storage investments, especially as they compare to multi-family/apartment investments. Having looked into the niche more and more myself for my own investing purposes, I figured a rundown of some of the considerations could be helpful to others.

The self-storage industry is a multi-billion dollar industry utilized by almost 10% of the U.S. population at any given time. Despite garages, attics, and basements, people can’t seem to contain their STUFF within their own living space and regularly shell out $100-$200 per month to help them store their items. The topic of WHY we tend to accumulate so much stuff is ripe for another discussion, but I’ll save that for another time and place. Suffice it to say, people need storage and are willing to pay for it in order not to have to part with their things.

So, what are some of the driving forces and considerations regarding self-storage from an investment perspective?

DEMAND
• Downsizing households - In general, most people are just not good with letting go of their stuff. This can be particularly true of the generation of people (or even those RAISED by the generation of people) who looked at their accumulation of possessions over time as a successful nod to the American dream and cannot conceive of the disposable consumerism we seem to have gone towards. Many of these individuals are now downsizing their households but still reluctant to part with their possessions. With the option of paying a relatively nominal amount to allow them to keep their things, they readily choose this option.

• Population growth – Just from the sheer population growth, particularly in some areas, there is often times a need for storage by people who are unable to afford housing that would allow them to accommodate the storage of all of their items within their housing. This might be seasonal or infrequently used items or items someone doesn’t want to buy again if they eventually move to a larger apartment or house.

• Business storage – Many small business owners have realized they can utilize a self-storage facility to store inventory or supplies at a cheaper rate than utilizing their actual business space for that purpose. Despite being at an off-site location from their business, for many businesses this works out to be a successful arrangement and a cost savings if they can keep their actual business site to a small footprint.

RECESSION RESISTANT
Self-storage is one of those rare entities that performs well in both good and bad economic times, albeit for different reasons. In good times, consumerism is high and people buy items they want without much regard for where to store their items. Sometimes this might be large things like boats, ATV’s, campers, etc. but sometimes it might simply be household possessions that just add up over time until at some point the owner wants to reclaim their living space and into storage it goes.

In economically difficult times, people are more likely to downsize their living space in order to make a significant cut to their budget. Many times they imagine this to be a temporary situation so naturally want to hold onto any of their possessions that they feel they will use again when they get back to a larger apartment or house. Having the option to temporarily store items is a great solution in this situation.

LOW OVERHEAD
For a variety of reasons, self-storage facilities are usually able to operate with low overhead expenses. A minimal number of personnel are required to staff a facility and typically that number of employees does not increase proportionally to the number of storage units in the facility. Much of what is offered at a self-storage facility can be automated to allow for a self-service type situation for the tenants, so employees of the facility can focus on assisting tenants in setting up leases, doing check-outs and cleanout of units on turnovers, and selling any accessory moving supplies offered. In addition, the infrastructure of these facilities is also fairly limited in regards to plumbing and electric which reduces the overhead from repairs and maintenance as well as utilities.

MULTIPLE REVENUE STREAMS
In addition to the service of providing a physical space for storage, most large and fully integrated self-storage facilities realize the opportunity for generating revenue by adding related supplies and services to their menu. Things like moving boxes, tape, locks, rope, packaging as well as moving truck rentals can all be added quite easily and at high margin. The convenience factor in offering these services can easily outweigh a reasonable mark-up in the item offered.

LOW TENANT TURNOVER
Most tenants utilizing self-storage do so for a period of time much longer than they originally had planned. Usually, there is some motivating and clear cut reason to get stuff INTO a storage unit, but once it is there it seems it is less motivating to get it back out within the original timeframe one anticipates. Part of that is due to the fact that it isn’t staring you in the face every day as you go through your house or garage – out of sight, out of mind as they say.

The set it and forget it mentality and the fact that most self-storage tenants are on a month to month lease, it’s easy for storage unit rates to be increased multiple times in small amounts throughout the tenancy period. A $5/month rent increase is not much incentive for even a price sensitive consumer to spend their time to pick up and move their stuff to another competitor’s facility across town just to save a few bucks each month. Because of this, most tenants will remain with the same facility for the duration of their storage needs.

MARKET FRAGMENTATION
Although the tides are turning, there is still a large degree of fragmentation of ownership of self-storage facilities. Other than the large, chain-owned facilities, there still exist a lot of mom-and-pop owned/operated facilities. As some of these long-term owners with inefficient and suboptimal operations decide to retire or get out of their small business, many of these larger facilities are being consolidated under the umbrella of professional owner/operators in the self-storage space. However, at this time, there are still a lot of these underperforming facilities that have not been absorbed by larger operators and these facilities can make great investments with the right value-add strategy.

LOW BREAKEVEN OCCUPANCY
As you have probably already read many times, one of the big benefits of commercial multi-family real estate is the economies of scale and protection from vacancy risk when you are operating a property with a large number of doors, especially as you get into the 100+ but especially the 200+ unit properties. It’s pretty easy math to realize that a handful of vacancies in a 200 unit property won’t create the same financial risk compared to a single vacancy in a small unit size property. Safety in numbers!

For the same reason, the breakeven occupancy of most self-storage facilities is incredibly low, sometimes as low as 50%. This, of course, is even better than the breakeven occupancy level of most well purchased apartments which, if underwritten well, should still be able to withstand occupancy in the 70% range. Of course no investor is in the business to just break even, but protecting the downside in any investment is pretty important and this factors right into meeting that objective.

Hopefully this review has given you a framework in which to consider self-storage facilities in your investing strategy. Feel free to add on any thoughts or considerations you have learned from your own experience or education in this niche!